Word of the day: NOT A-Okay

So this thing happened last Sunday that has been sitting like a brick in my stomach all week. I've been carrying it around with me and now, on the eve of the Stockley verdict, I am compelled to share the story:

Around mile 3 of a really beautiful long run in Forest Park, a man passed me, running the opposite way on the trail that loops the perimeter of the park. He was silhouetted pretty strongly against the morning sun at first, so I didn't notice his hand as I nodded politely at him.

It was positioned awkwardly against his body, thumb and forefinger circled together and 3 remaining fingers splayed up against his lower sternum.

But secretive and cautious, like a quiet question mark.

As he passed, and the gesture registered in my brain, I whipped my head around at him and blinked hard, wondering if I'd imagined it.

I questioned my friends (just ahead of me) moments later. They hadn't really noticed it, but had also nodded and waved at him...because you know, we are friendly folks. Neither were aware that the 'A-Okay' sign has been adopted by white supremacists. ('O-KKK'...those clever bastards). They offered possible explanations: maybe it was a side-stitch remedy, or a palsy. Perhaps I was dehydrated and hallucinating.

About 3 miles later, on the north end of the perimeter trail, there it was again. It was the same man, same gesture...only now elevated overhead, pointing our way like a salute.

This time, I stopped short in my tracks. This time, even my friends (both also white) couldn't deny it.

I felt sick. I felt like someone had just sucker-punched me. This place, this beautiful urban park that I cherish; the miles of trails and towering trees, the lovely architecture, it all felt suddenly soiled and ugly; tarnished.

After the initial shock and disgust settled in, I turned and chased after the man in a full sprint. I only made it about two dozen yards before I stopped my legs again. He was a fast fucking Nazi, and I realized it was a worthless chase even if my fury had allowed me to catch him. What was I supposed to say?

I just wanted to tell him NO.

No, I will not tolerate your beliefs.

No goddamn chance will I stand for this bullshit.

But instead, I turned around and ran 6 more miles, leaving my disgust like a trail of crumbs behind me, shedding it one step at a time and eventually having a lovely day with my kids and husband at the zoo and later, a baseball game.

I fully recognize this story just reveals me as the sort of White woman, slactivist, SJW-wannabe who calls her Representatives from her Bluetooth on her commute only on days when she's bored of her podcasts and feeling that fleeting but oppressive weight of her Catholicism-inspired guilt over her privilege. It also reveals I am not quick on my feet (figuratively OR literally) when confronted by an actual white supremacist. I am a woman who will be outraged and horrified and deeply disgusted by a 'not-guilty' Stockley verdict, but keep all those feelings safely at home with my family in the house I could afford largely because of my genetics and decades of racial inequality. I grapple with this constantly.

White women fucked up last fall and many of us are still attempting to atone for the sins of our sisters. We knitted pink hats and took to the streets and unfriended our racist high school classmates. We programmed our senator's numbers into our phones and joined activism listserves and Facebook groups. It feels simultaneously like too much and also not  nearly enough.

There is still a simmering pot of hate brewing over hot flames in our country. It's emboldened by a president who relies on them to stroke his fragile ego. It's perpetuated by propaganda machines mascarading as cable news. But then, I'm not telling you anything you don't already know.

I can say I am tired of this shit landing so close to personal space, interrupting my life in places I never expected.

My CrossFit coach turned out to be a Nazi too. He lost his job after marching in Charlottesville. He's the reason I know about the 'A-Okay' sign. 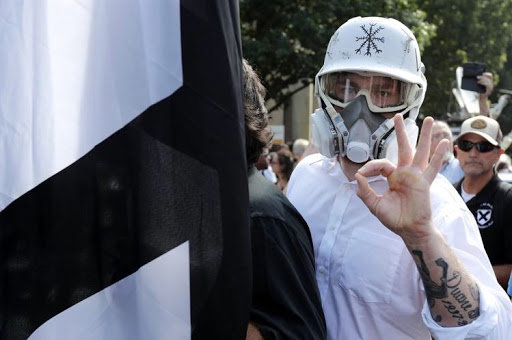 I had no idea. I had no idea about any of it. He was just a nice guy; a guy I respected and who helped me achieve a handstand push up (kipping, but still).

Life was easier before I became aware of all the ugly. I miss that day in grade school when some kid told me the 'A-okay' sign meant 'asshole.' And maybe it does. Even the Internet can't seem to agree on whether this gesture is actually racist or not. Maybe that guy is just a weird fucking dude who wants us to know he's all good. Maybe I'm spending too much time and effort distracted by social injustices and reading too deeply into this whole encounter.

All I know is that the rest of what I've said is real.

Things are decidedly not A-okay and it's becoming a whole lot harder to ignore that fact.