Word of the day: Uncomfortable

When I was 15 or 16, I found myself reluctantly subjected to the gusto and flare of some motivational speaker. I have no real memory of who it was, where I was, or what they were ultimately meant to have been motivating us for; but I do remember one particular, basic bit of rhetoric; Don't be afraid to be uncomfortable!

I was a dutiful soldier, or at least a marginally committed team-player, internalizing at least a bare minimum of all lectures coming my way; and I soon learned that this was a useful little tiddly-bit to carry around in my back pocket.

If I had spent my life until now paralyzed by the notion of discomfort, the whole thing would've certainly gone in a dramatically different direction.

At 18, I wouldn't have moved 4 hours from hometown sleepy Midwest college town (to another town described in very similar terms) or decided to take a chance on grad school (twice now). I wouldn't have studied abroad or jumped out of a plane or spent a summer driving across the county alone. I most certainly never would have called that guy back from that one float trip where I had too much to drink and acted like a total dipshit. You can bet I wouldn't have run 3 marathons or dared to try CrossFit over the age of 30.

In fact, caving to the fear of discomfort would probably have me still trapped in the communal woman's bathroom of my co-Ed dorm wearing only a towel, where I found myself the first week of freshman year listening to strange male voices from the other side of the door, alerting me that the men had indeed begun to move in.

As it turns out, Mr Motivational may have actually been on to something: maybe a little discomfort isn't necessarily a bad thing.

So, white people, I invite you to join me for a minute in waters which some of you may find to be somewhat uncomfortable. If you're feeling a little hot and shifty in your seat already, and bristled a bit by me calling out your race, than I insist you read on, you probably need to hear this stuff the most.

Let's start here with a simple request: Can we just promise to stop silently assigning a hierarchy value to everyone on the planet? Please?

Because look, here's the thing: one should simply not be valued more, or less based on the following:

- penis size (so will some of you kindly put your dicks away and stop trying to piss further than everyone else?)

- weight on a scale

- weight you can bench press

- how many carbs you had yesterday

- home many children you do or don't have

- whether or not you're a working mom (or dad...and if your brain just hiccuped a little there, spend a minute reflecting on why that happened before you continue).

Now. Here are some things I believe to be true, buckle up and get ready to perhaps feel a little discomfort.

Once we get lost in judging others based on this idea that one sort of particular person is better or more deserving than another, we are lost as a society.

When we presume a woman does indeed have a value of only 77% that of a man in the workforce, all of us potentially loses out on vital contributions from brilliant women in our industries.

Not too inflammatory of an idea there.

When we tell a woman that she 'can be more' that 'just a mom' then we are other-izing women who can't have or don't want children and we are shaming all of those people who are content and successful homemakers.

Once we decide that all young black men are criminals, we allow ourselves to sleep at night, yet rob their mothers and fathers of peaceful slumber, all of us knowing they're being gunned down in the streets.

Yup. I went there.

Once we buy into the notion that we have to pick a side between black lives and blue lives and fucking purple goddamn lives (screw you Barney), we are opening the door to unsafe communities and unsafe first responders. We are inviting riots and we are left with further conflict and greater divides.

We have to say black lives matter, and those words actually piss people off; how fucking sad is that?

Similarly, if we can't acknowledge our own internal bias and tendency towards tribe mentality, then we can never expect ourselves to actually treat all people with equity and respect. It becomes easier to ignore the truth behind the real need for criminal justice reform, voter protection, modern day slavery and basic civility towards one another.

In case you missed it, people of color are getting shit on all around us. It's a real thing. Look it up.

If our egos are so delicate and fragile that we cannot possibly accept any snippet of criticism and then use it to learn and grow and be better, do better...then we need to spend a minute reflecting on the why of that and the broader implications of our personal sensitivity.

While we are assigning blame to victims and and claiming to be 'color blind' (re: blissfully ignorant of systemic racism), we are quietly aiding and abetting institutionalize hate and criminal level abuse of power.

If we stick our fingers in our ears and angrily argue that our privilege was earned (and no, I'm not saying you haven't worked hard all your life, pay attention) and our safety nets are universal and the road to success looks and feels the same to all, we may as well be building barricades on those roads and need to be willing to accept what that means about ourselves.

Being even a little woke is exhausting and sad. But so is living in a world where the cards are so plainly stacked against you.

If we decide that our LGBTQ family, friends and neighbors aren't worthy of dignity and privacy or legal equity and recognition of loving and committed relationships, we are breaking the very souls of those people and convincing them they are somehow less-than. We are contributing to depression, anxiety, bullying and suicide and then how do we ever expect then to move forward together? How can we make our communities stronger and healthier by alienation?

If you try to tell me it's a lifestyle choice, I will be very tempted to throat punch you.

If we are too afraid to speak up against a known act of injustice, no matter how small, we are complicit in that very act.

Been there. Done that. Feels terrible.

And indeed, if we think we are sufficiently #woke by suddenly cracking our eyelids open to sneak a quick peek at a world that has thus-far wrapped us snugly in a cocoon of blinding privilege, we can never learn more and be a real positive vehicle for change.

Sigh. We are all a work in progress. Always.

But the bottom line is this: if we don't see some very big problems, we're just actively not paying attention. If we chose to be comfortable in our ignorance, we are by default, part of the problem. If you're blood pressure is up and you're formulating your counter-points and labeling me a left-wing extremist, I don't expect you to be with me today, and probably not tomorrow either. But just do yourself one little favor: start by allowing yourself to be a little uncomfortable.

It will make you better.

It will make all of us better.

We NEED to be better. 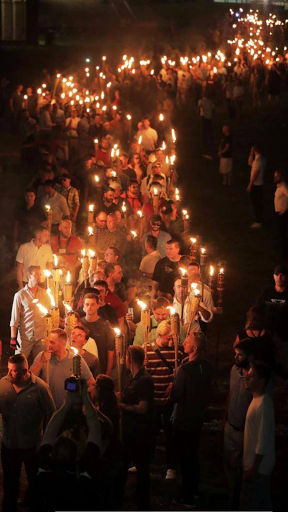