It was a long weekend without kids at a swanky downtown hotel; a glorious Christmas and birthday mashup complete with mascara, daily showers (the relaxing kind that go without interruptions by peeping toddlers) and dimly-lit restaurants that offer live jazz in lieu of grilled cheese, crayons, and high chairs.
I had grand plans to spend the weekend doing a questionable job of feigning sophistication in high-heeled short boots which had been purchased originally from Payless and then bought second-hand through a local buy-sell-trade group on Facebook, in a transaction that occurred in my driveway during nap time on a Sunday. (What can I say? I am a class act!)
Despite knowing full-well that this is the sort of manner in which I tend to acquire my wardrobe, my loving spouse coaxed me into participating in a time-honored ritual considered to be sacred by many of my gender: shopping. It's my understanding that women (and even men!) all over the world find this experience to be enjoyable, gratifying and even claim it to be therapeutic (re: 'retail therapy'). From the moment I was discovered to have been female, the women in my dad's family made it their mission to indoctrinate me into the church of consumerism. I was dragged on countless missions to 'shop 'til we dropped,' tirelessly seeking out the best deals while the men stayed home watching baseball. The trouble was, while I may have inherited the genes that tan my skin and prevent me from putting up with anyone's bullshit, I seemed to have missed out on the genes that cause the brain's pleasure centers to fire by scoring a hot deal on a pair of patent leather gloves. I vaguely remember embarking on a Black Friday trip when I was probably just barely out of diapers, and thinking even then: These people out here? They are bananas. Still, I adored my aunts and my grandmother and understood the importance of ritual and female-bonding. Therefore, I happily agreed to engage in their retail marathons and couldn't help but even catch an occasional contact high that came with executing the perfect purchase.
As I grew older, I realized that for me, embarking solo on a shopping expedition leaves me lacking all the necessary momentum for a successful mission. I live in a total grey space where all options seem viable and decision-making is daunting and tedious. I'm also fairly cheap and spend a lot of time mentally tallying up how my money might be better spent before buying something that's not totally necessary or practical. Amazon Prime is arguably the best thing that ever happened to me and I haven't left my couch to buy a Christmas present in almost four years. If there are no reviews or 'customers who viewed this also viewed' links readily available while I am making a purchase, I feel like a lost child: alone and scared.
The other thing that happened with the onset of puberty was that I became acutely aware that what I saw in the dressing room mirrors was a far cry from the leggy stick figures who were gracing the covers of Seventeen. Luckily, for me, puberty occurred during the height of the 90's grunge phase and I spent most of junior high wearing a fraying, inside out sweatshirt that belonged to my father. So while my mother was forced to watch her only daughter dress like a homeless person on a daily basis, she was subjected only rarely to the shit show that is shopping with a hormonal teenager who is filled with print-advertising-induced self-loathing.
Almost two decades later, my body may be free from puberty hormones, but has been battered by nearly four straight years of pregnancy and/or nursing hormones and thus, I am probably only slightly less tiresome to shop with.
So when my husband suggested we venture into the biting Chicago winter wind that blew along State Street and go shopping, I put on a smile and tried my best to channel the enthusiasm of my dad's sisters and mother. I knew I probably wasn't being very convincing when I found myself asking which stores were best suited for someone who wasn't in high school anymore, but also wasn't ready to take on pants suits just yet. I will be 34 this week and am stuck in what sometimes feels to be a vast dead-zone between the juniors and the misses departments. I am only really comfortable darting through the racks that sit between the juniors and the maternity departments at Target and can't recall spending money many other places since college.
Feeling super-apprehensive and slightly buzzed off the two beers I had at lunch (no kids, woot woot!), I marched confidently past Forever 21, knowing full well that this is true for absolutely no one and anyone who doesn't acknowledge this falsehood is living in a fantasy world that will eventually implode...probably in the presence of a mental health professional.
We ducked into Urban Outfitters partially to get out of the cold and partially because the cotton print dresses in the window felt fairly non-threatening. I breezed past a bunch of hipsters milling about among cropped shirts and found myself gently caressing a cotton-blend cardigan that would have found itself quite at home, hanging amongst five or six very similar garments in my closet.
'That looks like just about everything you own,' my husband pointed out, without missing a beat. And with the disapproval in the tone of that statement, I mentally accepted his implied challenge to make some purchases outside of my comfort zone. And thus, boldly chose a handful of dresses offering me a comfortable level of discomfort: 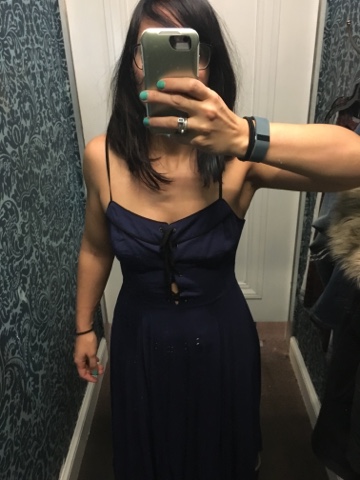 The first was a mid-calf length navy cotton dress with black piping and spaghetti straps that I felt would've been just lovely if I could have either added a couple eyelets for the enclosure on the front, or removed a rib. The fit along my ribcage ended up as a moot point anyways, as it was deemed 'too long' by my ulteriorly-motived shopping companion. 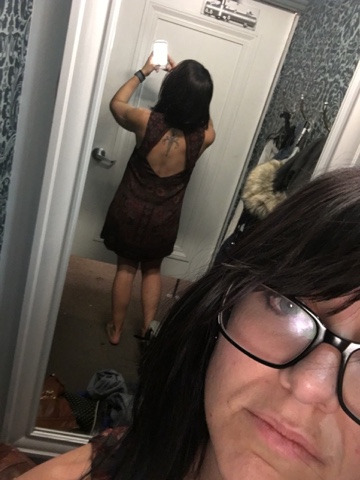 This is what my face looks like when I am pondering what age is considered 'too old' to go without a bra. Pre-motherhood, my breasts were never particularly reliant upon the external support of a brasier. Still, all that lactating over the past few years has given the girls a new appreciation for the earth's gravitational pull and perhaps put an end to my backless dress days. 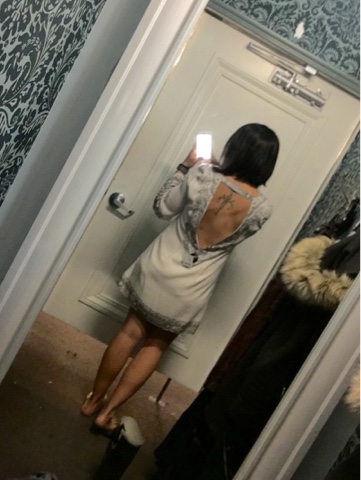 But not until I finished trying on this groovy little sixties getup!! The damn thing fit reasonably well everywhere but the sleeves, where my linebacker biceps created something of a log-jam; disrupting the necessary movement of skin on fabric which typically allows for reaching in functional planes without fully testing the tensile strength of the material. 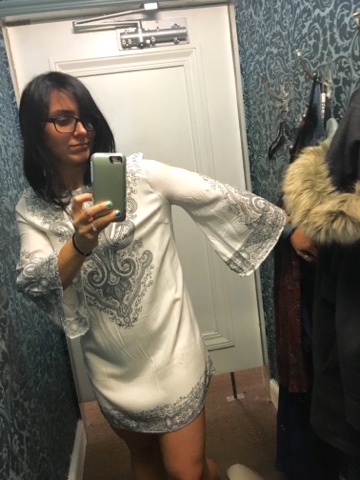 Last week, for the first time in my adult life...nope, scratch that...in my entire life, I managed to knock out more than one consecutive chin ups. Suddenly, this previously delightful achievement seemed to have been working in direct opposition to the ability to raise my arms overhead in this ridiculous dress and even somehow felt less important (which is bonkers, I know). 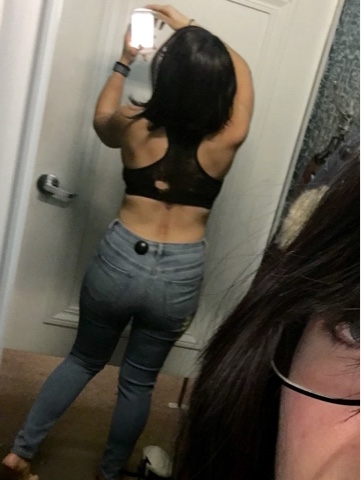 And then there were these mom-jeans. And yes, that is a sports bra with a hole in it, thanks so much for asking!
Next stop, Target.
I breathed in the familiar aroma of America's middle class and found myself grinning when I heard a toddler loosing her mind at the cash register. And that is where I made my first purchase, a pair of blue jeans: 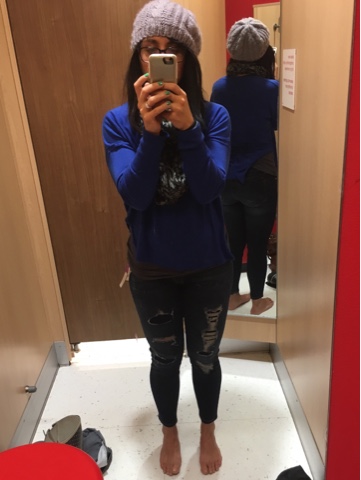 But see all the holes? Those holes are how I justified this bold fashion move.
Next stop was H&M where I bought a necklace and two camisoles which set me back almost 20 bucks in total. It was there that I also learned that someone, somewhere has decided that scrunchies are back in fashion. 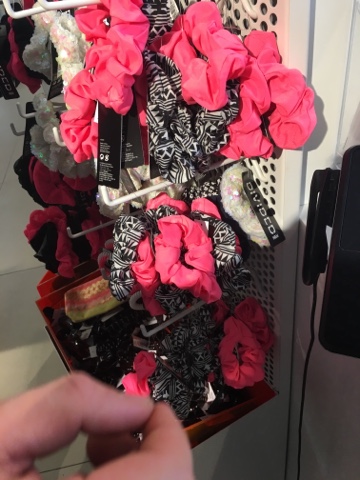 If I were to meet that person at a party, I still haven't decided whether I would give them a high five or smack them across the face. Either way, the fact that the scrunchies are almost exclusively hot pink seems completely unsurprising.
Nordstrom Rack was the sensory overload that sent me into just enough of an apathetic haze that I almost felt 15 again and I even made three more actual purchases. A black top, a white dress, and a grey scarf were enough to make me feel like I had proven myself worthy to be counted as a consumer, an American, and a female. 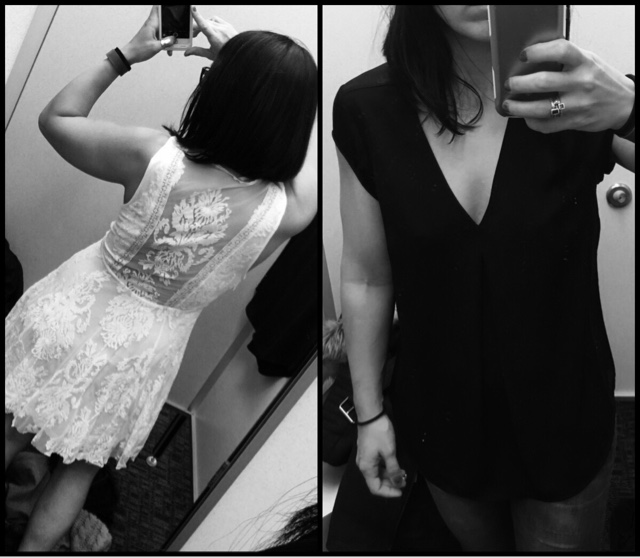 So I may never be the type to fully embrace the holy sacrament of shopping, but apparently I am the type to take a bunch of crappy fitting room selfies for a dumb blog post. That's something I guess....
If you need me, you can find me hiding in my closet organizing my cardigans by color and length.
Posted by Ready or Not Mom at 10:59 PM No comments: