Ok I'm a Runner, Get Over It

I recently read a surprisingly mean-spirited op-ed piece called, Ok, You're a Runner, Get Over It published by (here's another surprise) the WSJ criticizing runners; questioning their motives and declaring that the reason they run is to be seen participating in the most 'visible form of strenuous exercise.' He even launches into a rant about running magazines, running stores, bumper stickers, and race t-shirts.

At first, I was flabbergasted and offended on some very fundamental levels.  So I happily reposted a Runner's World response that was arguably even more mean-spirited, but resonated with my own response and therefore in my mind, totally justifiable.

Who was this guy to pick on the entire culture of running?  What exactly were his motives?  Did a 5K participant insult his mother?  Did reflective running gear once trigger a childhood seizure?  Why so angry Mr Stafko? Why??  It's been suggested to me that the whole thing is just 'tongue in cheek' satire and I should relax, but sarcasm is like a second language to me and I like to think I can spot the difference between irony and an angry rant.

I spent a decent amount of time fuming, a number of conversations complaining, and more energy than I should have playing defense against his aggression: I don't run for the praise or exposure, I run because (gasp) I like to run.

And then I started mentally composing this response.  Get this, I did that while I was on a run.  And I'm not ashamed to tell you that.  Some of my best thinking happens while I pound the pavement.

Here's what I decided:

When I started running with any seriousness back in college, I initially did it as a way to help shed the 20 lbs (ok, 30) that had accumulated with my growing appreciation for alcohol and love of late-night grease (po-key stix, po-key stix, po-key stix...*) both of which are available in unavoidable abundance on college campuses across our great nation.  But eventually, I did it because I began to actually enjoy it.  I know.  I was just as surprised as anyone.

So I could argue that I fall into the apparently forgivable 'fitness nut' category that Stafko mentions briefly near the end of his piece; those who started running before social media ruined humanity and who also enjoy a good spin class when they're not out bothering Jon Q. Public by hogging precious sidewalk space.

I will stand firm in solidarity with even the least serious of runners.  I will happily defend those following programs called things like 'Couch to 5K' and 'Running 101' and those who occasionally enjoy a good half mile jaunt around the neighborhood.  Hell, I'll defend mall walkers to the death.  Now there's a group of dedicated mother f*ckers who you better not pick on.

Our unfriendly writer tells us that,
There is only one reason running aficionados display the (26.2) stickers. They want the rest of us to know about their long-distance feats.

Know what pisses me off? Concert t-shirts. There is only one reason music aficionados display the names of their favorite bands on their chests. They want the rest of us to know about their concert-attendance feats.

Now, it's very possible that I have committed all the offenses listed in Mr Stafko's rant ...and then some: I have shopped at a running store, worn a 5K t-shirt to Starbucks, own a 26.2 bumper sticker (magnet, lives on my refrigerator), and yes, I run outdoors.  I am even guilty of using an app that posts my runs on my Facebook page. Hear that? It was Stafko's head exploding.

This is me, not apologizing for my apparently inexcusable behavior.

I consider running to be a part of my identity: Mother, Wife, Physical Therapist, Group Fitness Instructor, Mediocre Mommy-Blogger...Runner.  And while I certainly don't consider myself by any means an accomplished runner (I regularly get by a handful of dudes 20 years my senior) it's not any less important to me. 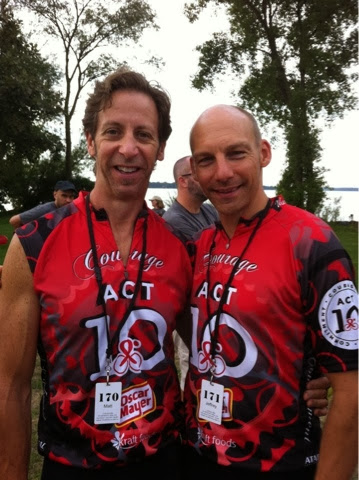 These two are smiling because they know they can kick your ass with or without a bike. 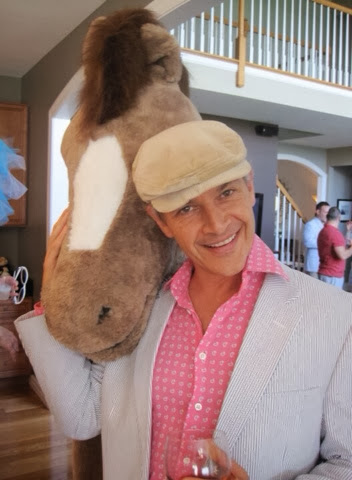 ...and *this* guy is more than just a pretty face (who loves himself a good derby party)

When a failing cervix put me on a forced fitness hiatus during my second pregnancy, I cried like a damn baby.  Yup. That's how much it means to me.

But apparently, I'm not allowed to talk about it because that counts as self-congratulations.  I can't announce it on the back of my car alongside the names of my graduate school and local NPR affiliate because it bothers some dude with a computer and a byline with the WSJ.

And why is that exactly?  Are we still operating under the assumption that he once had a refector-induced seizure?  Or can we assume that (more likely) there's some amount of fitness guilt there?  We don't get cranky and spew out 17 paragraphs of bitterness when confronted with a bumper sticker proclaiming affiliation with a particular baseball team, so why is this so different?  I can only assume that on some level Mr. Stafko is jealous.

There, I said it.

He just can't seem to fathom that a person would actually enjoy those particular behaviors that your doctor and scientists and Mrs Obama are always insisting will keep you healthy and happy (endorphins!) ...oh, and less of a drain on our flailing healthcare industry.  So he thinks these folks are just rubbing their healthy habits in his face as a form of bullying, boosting themselves up while making him feel bad...which he clearly does (mission accomplished team, we can all peel off our bumper stickers now).

Maybe you happen to agree with our running-phobic bard (because he is so poetic in his angry rant).  Maybe you think that deep down all runners are just show-offs in sneakers.  That's your deal and only you can identify where these feelings are really coming from.  I can say with certainty that I do not run to be seen, because newsflash: it is not a pretty sight.

But, I will not apologize for my hobby.  I will not be self-conscious of wearing a race shirt to the grocery store because that is what happened to be clean that day.  I won't even quit for posting my runs to Facebook; because if Suzie Snorefest gets to post pictures of her dinner, I get to jump on the look-at-me bandwagon and post about my runs.  I think it's safe to say Mr Stafko didn't hesitate to sit down and toast himself in the absence of his (former) running friends when his WSJ piece went viral.  Why can't we all be allowed to celebrate our accomplishments without ridicule?