How to Show Love for a Preemie Parent

November 17th is World Prematurity Awareness Day.  It's a good day to honor those littlest warriors among us: those who fought and prevailed; those who are presently battling the big, mean world; and those who came and left, too precious and fragile for this life.

It's also a good day to honor the professionals who dedicate their careers to caring for these tiny miracles: the doctors who sacrifice sleep and energy (physical and emotional) and precious time with their own families; the nurses who position their hearts and souls out on front lines of one of the toughest battlegrounds in the medical field; and even the support staff who keep the floors spotless, laundry fresh, and units running smoothly.

Those words are not sufficient, but they will have to do.

Over the past few months, I have joined a handful of virtual support communities on FB, partly out of necessity (the alternative being to slip slowly into a Gaudi-esque state of total lunacy and eventually run into oncoming traffic) and partly to pour fuel haphazardly over the fire of my full-blown FB addiction.  One of my favorites of these groups is called: Preemie Mom's.  I have forgiven the Admins for their grammatical error because the group is so well run and they've done such a lovely job of maintaining a safe space for mothers to share, encourage, celebrate, and grieve together.

On any given day, at any given hour (because preemie parents don't sleep either) there are women from all over the globe reaching out to each other; asking for advice, sharing photos of their little ones, and cheering each other along as they struggle with one crisis or another.  This month, a number of these ladies have been posting daily factoids about prematurity, starting with the letter A and working through the alphabet.  They mostly post these to their own pages, to raise awareness in the spirit of Prematurity Awareness, but also sometimes share with the group and often turn to each other when they're stumped on a particular letter.

It was on that page that I was inspired to write this post.

See, on November 17th, I think we should honor the babies and the medical professionals, first and foremost.  But I also happen to think we should kick a little love in the direction of the mothers and the fathers on this particular day.  No, I'm not trolling for sympathy or a pat on the back or baked goods or anything like that (unless you're offering baked goods...wait, are you offering baked goods??).  In fact, if the Facebook support community has taught me anything, it is that my husband and I are among the luckiest of the preemie parents.  Our boys were early (31 weeks), but not sick or in need of significant respiratory support (our brief run in with the ventilator during the great meningitis debacle of 2013 left me beyond grateful for this).

So how do we show love to those struggling preemie parents? (Besides baked goods...?)

That's a tough one. It really is. A new baby is supposed to be a joyous occasion.  It's supposed to be cause to break out cigars and pat daddy on the back and shower mommy with onesies and praise.  But a new baby who is encased in a plastic box and covered in leads and maybe relying on a machine and a tiny tube to fill their lungs is a little more complicated.

I remember feeling a little conflicted at first, when my phone filled with messages of bewildered but very sincere 'congratulations' after the arrival of our oldest, 9 weeks early.  Nothing about my delivery felt normal, so was I entitled to receive the usual sentiments?

I also got the feeling that in some cases, people weren't really sure what to say and that occasionally they would unwittingly say the wrong thing.  I also found my gut was not always as gracious as my mouth (thankfully, my mouth has at least some tact) and I would take offense to very innocent and well-intentioned remarks. I'm sure the apocalyptic state of my hormones had nothing to do with this either (sarcastic font).

Like I said, it's a tricky situation.  Learning of the (very) early arrival of the daughter of an acquaintance of mine just a few months ago, I found myself torn between wanting to lend my support and say something and accidentally offending her by saying the wrong thing.  A hormonal new mom (preemie or not) is a bit like a dangerous animal on a sedative that could wear off at any moment.  You sort of want to pet it, but also don't want to lose your hand.

So what's the right thing to say?

Well, like I said, I was inspired by a recent post on the Preemie Mom's page.  It was innocent enough, a fellow preemie mom looking to make a 'how to' list for survival in the NICU and also one of 'things not to say' to a NICU parent.  The responses came in droves, with all the voraciousness  you might expect from a group of overly-stressed and sleep-deprived new moms, all hopped up on hormones.  They blew right past the appeal for NICU survival tips and bellowed out a laundry list of insensitive comments they'd been subjected to by (probably well-intentioned) friends and family.

And so, I will begin by sharing the remarks you might avoid and then close with a list of things to say (and do!) that might be comforting and even helpful.  I do this because the last post I wrote on the topic of what not to say (understandably) left some folks feeling too paranoid to speak to me at all.

And I fancy myself a friendly gal who would hate to alienate anyone.

AVOID:
At least you can still get some sleep while he/she is in the NICU!  Here's a case of a well-meaning sympathizer who is obviously trying to put a positive spin on the situation and instead demonstrating a certain amount of ignorance.  This person is usually also a parent (of a full-termer) and rarely a close friend.  And yes, I heard similar versions of this statement with both my boys (never from close friends). Newsflash: no one sleeps well when their infant is in the NICU; particularly not breast feeding moms who wake every few hours to the sound of an alarm instead of hungry baby-cries only to spend 15-20 minutes with a cold, unforgiving boob-sucking machine instead of a warm, cuddly newborn.

SAY INSTEAD:
I can imagine you're exhausted, I hope you are able to find some time to rest.

AVOID:
When is he/she coming home?  This one seems pretty innocent and frankly, it's a valid question.  It's a question that plagues every NICU parent and pops up every other day like a damn bad penny.  The answer is: when he/she is good and ready.  Otherwise healthy preemies must meet basic milestones before discharge: maintain temperature, gain weight steadily, and master the ability to suck-swallow-breathe so they can eat without turning into baby smurf.  Even the doctors don't know when that will be until it actually happens and the smart ones won't speculate on it.  It's a question that likely only raises the anxiety level of our preemie-parent, who has likely reached maximum stress-capacity already and could

SAY INSTEAD:
Your little one is in good hands and we will be so happy for you when he/she is healthy enough to come home!

AVOID:
Oh, your baby came at 33 weeks? Well, that's nothing.  My cousin's baby was only 26 weeks and... Blah blah blah.
Guess what.  It's not a competition.  And there are no comparisons.  My boys came within one day of each other gestational age-wise (31+3 and 31+2) and we had very different NICU experiences.  Yes, some situations may pose more risk than others, but this is not the time to start playing the one-up game.  Hard is hard.  Hurting is hurting.  It's far better to support than to compete.

SAY INSTEAD:
My cousin had a preemie too.  I'm sure she'd be happy to talk to you if you like some support from someone who's been there!

AVOID:
Oh, I guess you won't be able to breastfeed...or any similar BFing or formula comments.  Can we just put this on the taboo topic list along with religion and politics and the Affordable Healthcare Act?  This goes for any new mom, in fact.  If the topic is raised by your particular preemie (or full termer) mom then it's safe to discuss...with caution.  The decision to BF or formula feed is highly personal and in the case of a mother who is physically separated from their kiddo (who may very well still rely on tube feeding) it's even more sensitive.

SAY INSTEAD:
Nothing.  Go find someone to argue about healthcare with instead.

AVOID:
Wow! You don't look like you just had a baby!
In my case, my body just sort of ballooned in all directions and I went into both my deliveries looking more like a woman who appreciates a good Big Mac and less like a glowing mother-to-be.  I came out looking somewhat similar.  However, a fair number of preemie moms don't have a chance to look very pregnant and therefore don't look much different after delivery.  It may seem like you're paying a compliment here, but really you're just reminding her that she's been unable to keep her little one safe and snuggled in her belly to 37+ weeks the way God or Allah, or L. Ron Hubbard intended.

INSTEAD SAY:
Nothing.  She doesn't care how she looks anyways.... No NICU mom has enough energy left to be vein.

So, there's a short list of how to show love to your preemie moms and dads.  It's certainly not a complete list and it is not meant to discourage you from lending support.  A good rule of thumb is to just be compassionate and willing to listen.

Come to think of it, that's probably good advice to live by in most every situation. 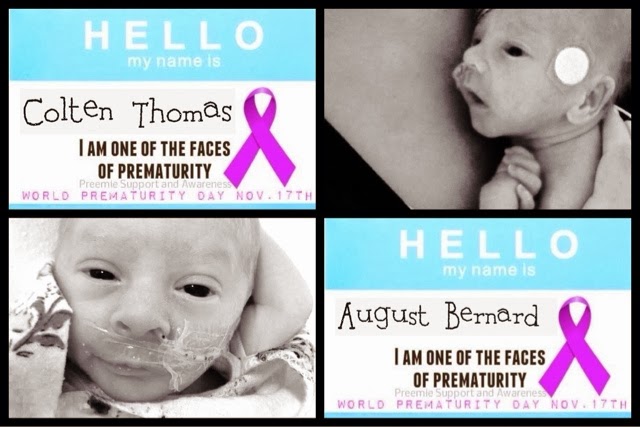 If you're looking for more ways to lend support to spreading prematurity awareness, click here.

Email ThisBlogThis!Share to TwitterShare to FacebookShare to Pinterest
Labels: Parenthood, Preemie Parenting, What Not To Say