Lessons I have learned:

1) Prepare for the witching hour: So apparently small children are pre-programmed to click into melt down mode between 4 and 6pm.  Did you know this?  I have heard it called the 'witching hour' which implies that my little guys are somehow possessed by evil spirits during this period of the day.  Which is nice I guess, because at least it can't be blamed on my parenting.  It does, however, make me consider finding a priest I can keep on retainer for nightly exorcisms.

When I know that Ready or Not Dad is scheduled to be gone in the evenings (happens 2-3 times a week this time of year), I do my best to prepare in advance in order to lessen the blow of a two-pronged attack by my children.  I get as much of dinner prepared in advance as possible, break out the baby sling and my best dance moves, and I douse myself in holy water (just kidding...unless you know where I can get my hands on some?).  I will openly admit that I also frequently turn to the big, bad television as a blatant disregard to the AAP's recommendation of 'zero screen time under two years old' (Those people clearly don't have children, and certainly not two under two)

Remember when 4-6 pm was called 'happy hour' and they served discounted drinks?

2) Get out:  For the first month or so when both kiddos were under the same roof, I was terrified to leave the house.  It was somewhat justified given the fragile state of our little guy paired with the oppressive heat. After the first month, though, the three of us started to go a little bananas.

Finally, the weather broke and I decided to grow a pair of mom-balls and make a break for the fresh air.  I strapped the little guy to my chest, popped the bigger guy into the stroller and we set off to the park up the road, even making a pit stop for iced coffee and a sample of freshly baked bread at our local Great Harvest (that place is a carb-lovers wet dream).

Since those first few short trips out of the house, the confines of our living room have started to feel more and more stifling and soul-sucking for all of us.

Toddler monkey is now prone to plopping himself down next to the front door, waving five plump little fingers at me and pleading, 'bye bye??'

Baby monkey will scream incessantly until the minute the door closes behind us and he tastes sweet freedom.  His happiness generally lasts only as long as our outing.  He even came to a spin class with me this week and snoozed more soundly and peacefully in his pumpkin seat next to my bike than he had all week in his pack-n-play.  He joins me on my runs now because it is kinder to strap him snuggly into the stroller and let the vibrations of the road lull him to sleep than it is to leave him with the hubs whose attention, in my absence, is divided between him and his brother.  It slows me down, but burns off more of the baby weight.  Fair trade, especially when you weigh in a happy baby.

My kids already strive for a world bigger than our 1,600 square foot home can offer and we intend to provide them with that.

3) Double stroller is a must:  During my second pregnancy for whatever reason, we decided that a double stroller would be a big waste of money.  We were already the proud owners of three different strollers (Chico travel system, umbrella, and jogging) and thought one more might classify us as stroller hoarders and land us on some terrible reality show.

Then I got a little desperate and sent a shout out to the FB world.  I ended up with a third-hand Phil and Teds (which makes me think of Keanu Reeves and a phone booth whenever I say it aloud) double sport stroller and I have never been happier.  I can easily snap the pumpkin seat on top, drop the toddler monkey below and we are free to roam the world.

Watch for us on a special edition of A&E's Hoarders: Parents Lose Control.

4) Confidence is fleeting at best.  One minute I can feel like I am rocking the socks of motherhood; finishing dinner prep an hour early with one kid playing quietly and the other sleeping peacefully and the next thing I know, the baby is screaming and the toddler is whacking the dog with a plastic hammer (cue my husband's return home to witness the chaos and reconsider his choice of life partner).

My days are action-packed with my waxing and waning confidence in my abilities to pull off motherhood.

Sometimes, when toddler monkey is politely signing he'd like *more* food and baby monkey is happily nursing,  I think I have a real shot at Mom of the Year.  Mostly though, I just feel like an imposter who's parental rights are hanging
by a very thin thread (they'll find out soon enough that the Cat in the Hat and Super Why are invited into our pre-two-year-old home via 50-inch screen on an almost daily basis). 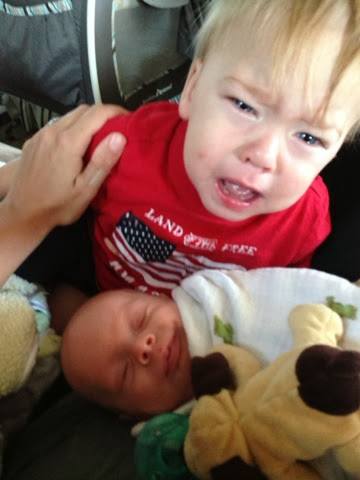 You can't win 'em all