When I was a younger version of myself, I was a total fear junkie.  Starting in middle school, I devoured every form of horror fiction starting with R.L. Stein, dovetailing seamlessly off of Christopher Pike, and landing predictably on Steven King.

For a brief period, my favorite movie was The Shining.  In grade school, I co-founded an informal (and tiny...I think there were three of us) book club whose purpose was to discuss ghost stories we found in the library (using the card catalogue, bitches!).

In junior high, I was no stranger to sleepover games such as Ouija Boards and Light as a Feather, Stiff as a Board.  You guys know that game, right?  It's where a 90 pound 12-year-old girl lies supine in the dark surrounded by nine or ten other 12-year-olds who eventually lift her into the air.  The game always ends with everyone bewildered and delighted that such a feat is possible...clearly,  muscle-bound spirits are heavily involved in the process.

Whatever the reason, I just could not get enough of scaring myself stupid.

And I really mean stupid.  By the time I was in college, I realized that perhaps I needed to back it off a touch.  At that point, I had spent the better part of a decade fueling my already wild imagination with disturbing images ('come play with us!') and notions.  I found myself leaping in and out of bed from a sizable distance for fear of having my ankles grabbed.  I couldn't look my at my own reflection in a darkened mirror.  And worst of all, I was incapable of sleeping alone in an empty house or apartment.

This may have contributed to some questionable decision-making during my college years, but I managed to make it almost to graduate school before spending a whole night alone in a single-family home (dorms and sorority houses didn't count).

See, every tiny bump in the night quickly became Jack Nicholson wielding an ax and looking totally unglued.  At least in the dorm, I could toss my tiny roommate at him (I would miss her) and run down the hall to get help from the stoner Middle Eastern kid or the smelly guy who lived by the elevator or that guy who looked like Jesus and was eventually arrested for selling drugs.

Finally, when I was 22 and living at home for the summer, I was asked to house-sit for a friend's family.  After I panicked and headed home in the middle of the night during their first night away, my mom gave me the kick in the pants that I clearly needed:  'Get your bag and I don't want to see you again until those people come back home.'

And that was perhaps my first official step (shove?) into adulthood.

Now I am a wife and mother of two and I have completely abandoned the horror movies and books I used to love with such vigor.  I have now replaced that particular brand of contraband with parenthood.

And it works out just fine...because turns out, parenthood is terrifying.

Here is a short, incomplete list of things that are terrifying about being a parent:

1.  SIDS: Are you kidding me?  You mean to tell me that my precious baby, the very epicenter of my existence, could feasibly just die...suddenly and without warning.  I am told that realistically, the odds are pretty slim that this will happen, especially if we follow all the safe sleep guidelines (even if this is nightly battle of wits).  But the possibility of losing my son forever and for no apparent reason despite all efforts to keep him safe,  is enough to drum up the deepest type of fear imaginable.

2.  Older siblings:  I once heard a This American Life episode that aired recorded anonymous apologies from something called the Apology Line, set up back in the eighties in NYC.  One of the recordings was a man apologizing for killing his infant sister. He had been placing a plastic bag over her head to watch her turn blue.  At the time, it was like a game to him.

That sh*t haunts me (and probably you now too...you're welcome)

3. Stairs: Because my one-year-old has no fear and prefers head first travel.

4. Walking: Because I'm slower than I used to be and the kid can already almost outrun me at a crawl.

5.  Not walking:  I'm a PT for crying out loud, people are already wondering why my now 18-month-old (16 age adjusted) can't toddle unsupported more than a step or two.  How many people get to fail as a parent and a professional simultaneously??

6.  Talking:  Eventually, my little one will say more than just 'dada' and 'uh oh' and 'doggy' and 'ball' ... And I'm confident he will someday also swear (Hell if I know where he would hear that sort of f-ing language).  And I will laugh.  And he will repeat it (because he already thinks he's a real comedian and will do anything for a laugh).  And then the State will take him away from me.

7.  Not talking:  Valid concern.  You guys are smart.  So just now picked up on the fact that he only says four words.  Let's face it, you've been silently judging my parenting since #5 anyways.

8.  Choking:  Toddler monkey is notorious around here for putting everything in his mouth.  I have a feeling he's just hungry all the time (like Mommy!) and every time he comes across something new he thinks, 'hey, maybe this is food!'  The idea that he will eventually find something the right size and consistency to clog his airway is not at all beyond the realm of possibility.  I mentally review the first aid parameters for infant/toddler airway obstruction at least eight times daily (five back blows, five chest compressions and repeat).

9.  Window blinds: Is it me or is there really a news story just about once a year featuring a toddler hanging themselves on window blinds?  Consequently, if you ever have the urge to open a window at my house, you'll need a step stool to reach the cord on the blinds.  I have tied those puppies up like they're trying to escape and I *still* can't sleep soundly at night.

10. Accidental neglect:  As long as we're talking tragedies in the news, let's discuss those poor parents who accidentally leave their infant children in backseats   It comes up in the news almost as often as those damn window blinds hangings and it makes me nauseous every time.  I can't tell you how many times I have left my lunch in the car or absently put the TV remote in the refrigerator. One can only hope that my belief that I am overly susceptible to this type of tragedy makes me extra cautious to avoid it.

11.  Water:  Pools, bathtubs, fountains, coy ponds, puddles....you name it and it terrifies me.

If you most know, my greatest fear for myself prior to having children, was drowning.  Mostly, this was because I consider myself a pretty strong swimmer and therefore assume that the situation is pretty extreme if I'm going down: think rip tide, shark attack, boating accident, car accident (I have actually googled how to manage this particular disaster, but obsessively drive on the middle-most lane over bridges anyways).  I also worked as a lifeguard, lifeguard instructor, and lifeguard auditor (yes, that job exists) for years and frankly I think I know too much about the mechanics of drowning.

Now, we find that Toddler Monkey is a total fiend for water activities and has zero respect for the dangers possible dangers involved.

12.  The rest of my life: My fears are presently very specific to parenting young children.  Assuming I am able to keep these two monkeys alive, my fears will assuredly only evolve over time.  By 2018, I'll surely become paranoid about child predators.  In 2028, I'll be freaking out about sex, drugs, and probably even rock n roll.  The fear, I am certain, will not end.

Parenting, as it turns out, is like the longest, most terrifying Stephen King novel you could ever imagine. 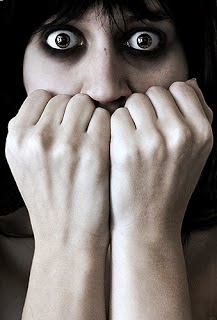