Just the other day, a friend of mine posted the following link on my Facebook page and I suddenly felt like my world had been turned violently on it's head.   I suppose you could say that much like our friend the Fresh Prince: my life got flipped-turned upside down. 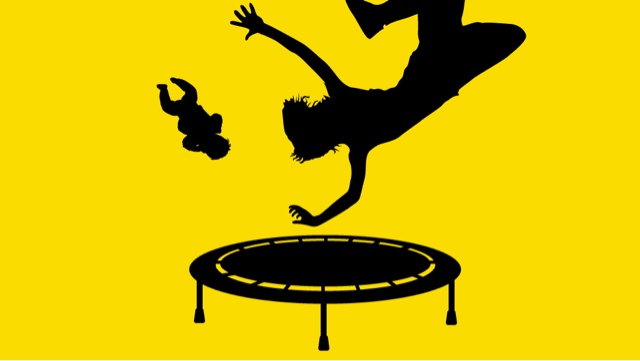 I'll spare you the four to eight minutes it would take you to read the post (depending on which second grade reading group you were assigned to) and give you the basic gist:

Women in America are among the only women in the world who aren't provided some structured postnatal care.

Postnatal care?? You mean, that 15 minute OB appointment you attend six weeks after expelling a person from your loins? The one where they glance at your hoo-ha, write you a birth control prescription, and with a wink and a nod, give the A-okay to go home and do the nasty again??

No.  Postnatal care means simply this: new mothers are cared for.

But wait, you say.  We get two whole days in the hospital.  Three, if they sliced open our abdomen.  And then, if we're very lucky, we live in a state that allows short term disability to be used for up to six weeks of partially paid maternity leave so the household finances don't completely fall apart when life is already mind-numbingly stressful.

Everyone knows a six-week-old baby pretty much runs on autopilot anyways, so why would mom feel the need to be around those extra 40 hours a week?  Get that kid a job and an apartment already, he's practically grown!

And those tiny little people are definitely sleeping through the night at that point, so mama is rested, revitalized and ready to head back firing on all cylinders and anxious to meet those productivity standards.

Let's say we were savvy enough to save up those sick and personal days.  Federal law via FMLA says they can't even fire you for greedily deciding to take 12 whole weeks away from your job.  Isn't that generous?

Here's an image that will certainly drum up some bitter resentment in even the proudest, most blue-blooded American girl: 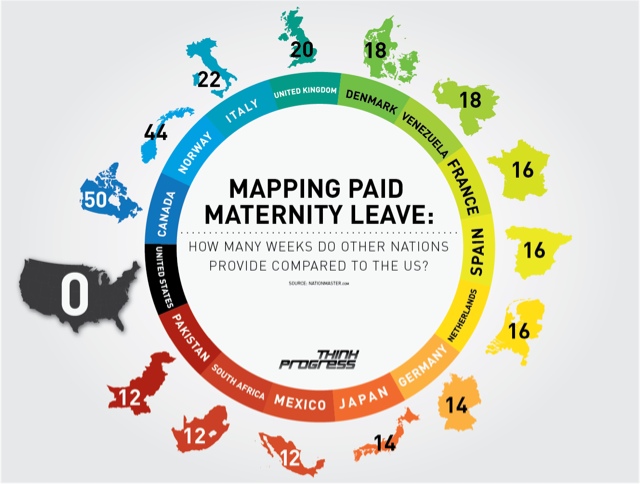 That's right ladies.  If this graphic is to be trusted, our dear neighbors to the north get nearly a year of paid maternity leave.  Yes, I said paid.  Shoot, the Netherlands gives it's mamas 16 weeks and once they're done nursing, they can reward themselves with a joint.

But enough about the workplace. I could literally go on an on for hours before I fall off my soapbox in an exhausted pile of postpartum outrage; and that's before I'd dust myself off and get back up shouting about nursing moms and pumping at work.

Where was I again?

Oh yeah, postpartum care.  So let's pretend that working is not an issue (even though it is for so many of us).  Let's just focus on how new mothers are viewed by society and by themselves in these great United States.

The link posted on my FB page was really a response to an article in the Daily Beast where author Hillary Brenhouse compares American postpartum practices to those in other countries.
Upon reading this article, I was flabbergasted.  Remember that Fresh Prince analogy? I may as well have just been sent by my momma to live in Bel Air.

Brenhouse opens by pointing out that Colonial Americans believed their new mothers should spend the first 3-4 weeks (or longer) engaged in what's called a "lying in" period.  During that time, they hardly lifted a finger.  Instead, they focused on feeding and bonding with their babies and on recovery and healing while they were cared for by a team of women volunteers (some family, some friends).

Well sure, you say.  That was back in the days when women were considered too fragile and/or dumb to vote or hold public office or join the workforce.  Birthing babies and raising them was their only job, so why not do it right?

Get this though: Brenhouse tells us that in parts of Africa, Asia, the Middle East and even Europe (gasp!) some version of 'lying in' still happens today.  In China and Mexico, she reports that new mothers are given between 30 and 40 days of "restful confinement."  In France and other countries, women stay nearly a week in the hospital after childbirth.

Granted, my babies have proven to arrive early, haven't weighed more than a half gallon of milk, and required several weeks in the NICU so maybe I'm not the most perfect example.  But here's a rundown of my postpartum experiences.

With #1:  I spent two days in the hospital and returned to work a week after my delivery.  This was necessary in order to accumulate more time off once my little guy came home.  I worked five days a week, bouncing between work and the hospital, and waking every three hours during the night to pump breast milk until my son was discharged from the NICU at five weeks old.

With #2:  After two miserable months being told not to exercise, I was running again a mere four days after delivery.  The following week, I worked three days before my family talked me out of it.  Two weeks post-partum, I was assisting my husband in building 160 feet worth of fence in our backyard; lifting and carrying the heavy panels because our other helper (a neighbor) had back surgery two years ago.

I am presently home with both my boys (ages 2 and 17 months old) while my husband -- a high school band director -- works up to 15 hour days.  And naturally, because the poor guy has to work so many stinking hours (and with teenagers, yuck!), there's no chance I would ask him to step in for any part of the midnight baby action.  In fact, I sleep on the couch downstairs so the squeal machine and I don't disturb him.

Because I am a product of our win big society, I have decided not just to bare-minimum parent but to go for the Gold.  I leave no dirty dish undone or dirty sock unwashed in case the judges for 'mom of the year' show up at my house.  We go on walks, to the park, and on play dates.  I work out almost daily for my sanity, but also because I fear for my 'night job' as a fitness instructor (who wants to take a spin class from a woman who needs an oxygen mask and could stand to lose 40lbs?)

Sure, I could send my toddler to the sitter, but we barely have enough money to pay for our Netflix account, never mind our exorbitant student loan repayments which essentially amount to a second mortgage (see above rant about maternity leave).

Plus, it just feels like a cop out to me; like I would be ducking out of a marathon at mile 18 or 20.  Not to mention, the toddler is the real entertainment around here.  He's learning to walk and to tease us and his giggles are positively contagious. Why not enjoy him while he still likes me back and before he turns into a resentful teenager?

Plus, I'm an American woman dammit.  We don't want to cut out of the marathon early.  We want to win the damn thing, or at least place in our age group.  And then we want to go home and cook dinner and act like it's no big deal.

I was recently talking to my dear pal Miss Truth in the days before her scheduled cesarean.  When I inquired about the plans for Tiny T once Baby T arrived, she bashfully admitted that she'd arranged for childcare.  I got the impression she thought that this was somehow shameful.  Did you catch the bit about the c-section? The woman would be healing from a rather significant surgical procedure rendering her practically immobile, why would anyone expect her to spend her nights caring for a newborn and her days chasing a willful toddler around the house?

So here's the thing.  I never felt like I couldn't do any of the arguably crazy postpartum sh*t I have gotten into.  I never felt faint or crumbled into a pile of exhaustion.  It's possible I had a few moments of mommy-meltdown (you'll have to verify that with my husband) and wasn't always winning Miss Chipper awards when it came to interacting with my husband and parents (my favorite people on which to unload my frustrations).

Still, the point here is that I never once considered that I needed to be cared for.  If, after I had given birth, someone had told me to jump in bed and stay there for a month while they took care of everything, I would have laughed in their face and gone about my business of knitting a super-mom cape from a pattern I found on Pinterest while simultaneously nursing my newborn and making faces at my toddler.

You know, just like any other American mom slash superhero. 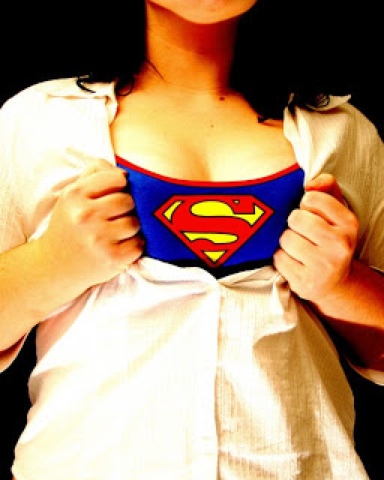