Day One of My Captivity

It was always a distinct possibility that my second attempt to procreate would culminate with a period of time confined to a hospital bed.  The early and quite startling arrival of my first little man left me feeling anxious about future pregnancies; but not so anxious as to prevent the casual (maybe even reckless) conception of #2 a mere eight months after delivering my son a full nine weeks early in the midst of hysteria and the absence of my husband (just out grabbing dinner...no biggie)

My new OB, an unassuming young woman -- admittedly chosen largely from the fact that her bio mentioned a love of running -- with practical shoes and a dry sense of humor (another irrelevant perk), calmly assured me we would 'do our best' to make it to the benchmark goal of 35 weeks.  Her calm reassurances persisted, even after my cervix (that's the basement of the uterus) began it's mysterious disappearing act after 21 weeks.  She mildly suggested I begin to cut back off my usual high impact, highly active lifestyle, cautiously citing the recent professional criticism of strict bed rest.  This allowed me to at least keep my 'day job' as a PT and toddler-mommy, even if my extra-curricular occupation as a fitness instructor had to hit the pause button.

Two weeks ago (28 weeks), after weekly cervical checks, we hit a short enough point that more treatments were indicated.

Male relatives or anyone with a history of squeamishness in response to topics such as menstruation or childbirth, or if you get jittery when you hear or see the word 'tampon', may choose to skip the rest of this paragraph:  Now, in addition to my 'vag pills' -- vaginal progesterone, and no you don't need to chase that with food or water -- I was now the proud owner of an inflatable pessary.  It's a balloon for your vagina (insert balloon animal joke here). And did I mention it was the size of a small fist?  Why would I? It would just make you uncomfortable.  Suddenly siting was my least favorite thing to do.  Stick a partially deflated tennis ball up any orifice in the southern region of your pelvis and you'll know exactly what I'm talking about.

Ok boys, welcome back.  During the placement of my above-mentioned medical device, it was discovered that I was actually experiencing contractions.  Who knew?  Not me. Enter another drug (procardia) to suppress said contractions.  Every six hours, round the clock.

Six days and four ER visits later (two for me and two for my darling little boy smacked with a double whammy of paraflu and rhinovirus resulting in Croup)  I was hoping we had things under control.  The kiddo was healthy again and at the very least, we were getting our money's worth out of our medical insurance.

Things were calm for about a week. Last week's appointment showed no further thinning (high five to me!) and no contractions on the 'Non Stress Test'.  I was elated. Suddenly a long, uncomfortable summer carrying a baby to full term seemed like a gloriously realistic possibility.

More thinning (down to 1.3cm) and more contractions, like 4-5 minutes apart contractions.  Now I was pissed. I had done everything I'd been asked to do and here we were.  Lots of water, a small meal, and a dosage of procardia did make a small dent in the significance of my contractions, but not enough to avoid another trip to the GDWEU (God Damned Women's Exam Unit---3/5ths of that is a legit acronym, I'll let you guess which part)

A quick manual check of my cervix earned me an express trip down the hall to be admitted as an inpatient in the peri-natal unit.  As my wheelchair rolled past the doors to the NICU on the way to my cell (I mean, hospital room), I couldn't help but let the tears spill over.  Thank God for modern medicine because apparently, my lady parts weren't designed to cook babies much past 30 weeks.

Here I am.  I am tethered to an IV pole, strapped to 2 different monitors and secured to the bed by way of SCDs; In essence, held captive by a highly uncooperative, incompetent (that's a medical term BTW), and irritable (also a flipping medical term) reproductive system. 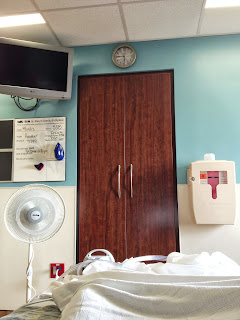