Day Four of My Captivity: When is a hand not a hand...?

Day four of this particular party means a couple things:

1) I have now met four different resident 'doclings' who apparently have all made it their mission to desperately over-compensate for the current Attending MFM's borderline-curt bedside manner.  It's adorabe too because they have less than six seconds to do so before they are abruptly tugged out of the room by the invisible force-field that tethers them to him. Honestly, I don't sweat his brief visits.  He thoroughly cuts the BS and doesn't seem to believe in making predictions that may just prove false.

2) Time for a new IV site!   I believe there are two types of people: those must watch the needle enter their flesh and those who can't.  I fall into the latter group.  Once the little bugger has punctured my skin, we can be total pals, but no sooner.  In the moments *during* it's mini assault on my outer layer, it's fully necessary that I chose a nice spot on the wall or ceiling to scrutinize so I don't freak.  This habit started during my blood donation days back in collage and holds especially true with the 1 bazillion gage needle presently pumping no-baby juices into my system.

Question for ya: when is a hand not a hand??

When it turns into a pincushion.

'Our charge nurse is really good at placing IVs,' my nurse pointed out in a confident manner which should have been a clue that the universe was about to turn on me.  I only tempted fate further by joking with the poor woman as she scattered her materials along my blanket: 'I hear you're really good, so no pressure.'

Naturally, it then took three attempts by two separate nurses in two different limbs to find a cooperative vein.

You should have seen the bloody mess my poor husband and son walked in on...the kid may only be 15-months-old, but he will for sure need therapy now at some point.

Now I have a sparkly new IV site in my right arm and a battered left hand.  If they discontinue the mag today, I might actually be bummed. 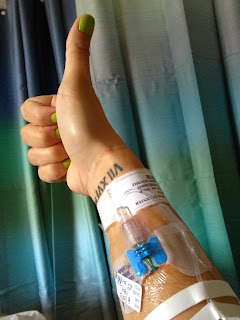